I had a request for images of more not-so-skinny goddesses, especially Celtic ones, since the last post was all about Aphrodite/Venus. I’m doing my best, but sadly, the ancient Celts didn’t go in for a lot of statuary, and the Christian smashed a lot of what existed. What remains is almost never identified by name, so modern Pagans tend to kind of assume who they were based on their attributes.

One of the idols of Boa Island in County Fermanagh, Ireland. You can’t even tell the gender on this one, much less who it’s meant to be. Included mostly to show what pre-Roman Celtic statuary looked like.

Roman-era Celtic carving. Generally known as “the three mothers”. Women of those proportions would definitely be considered obese today. 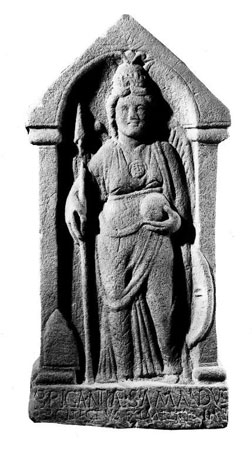 After the Roman invasion of the British Isles, many Celts copied Roman styles for their own images. This is one such. Generally presumed to be Brigantia. Nice hips!

Under the Christians, many old Pagan gods became saint. Brigid is one of the most famous of these. Here’s an image of St. Brigid. Round face, comfortably padded.

Now some other pantheons:

A reproduction of a 6th century Swedish bronze of Freya, Norse fertility and love goddess. Kind of the local equivalent of Aphrodite, except that she also rode into battle at the head of the Valkyries, and half of those slain went to her hall instead of Odin’s. Definitely fat!

This statue of the ancient Babylonian goddess Ishtar is now in the Louvre. Tiny waist, great big thighs.

Definitely obese by today’s standards, here’s a reproduction of a Roman copy of a Greek statue of Hestia, goddess of the hearth.

Here’s an Incan goddess (whose name I can’t find) who is definitely right up there in OMGDETHFATS. Roman statue of Cybele, an Anatolian mother goddess. Not skinny!

Diana or Artemis of Ephesus. I just do not even know what to say.

There are an awful lot of ancient figures that get called “Venus figures” that are not provably goddesses at all. The Venus of Willendorf is the most famous of there, of course, with her huge belly and breasts, tiny ankles, nonexistent feet, and featureless face. I’m not too fond of that one, nor the similar Venus of Lespugue, but I love this Dreamer of Malta figure, about 5000 years old:

Figure found in Catal Hoyuk in what is now Turkey. About 8000 years old.